This paper gives an overview of industrial SMB chromatography and focuses on the strategy of how to develop a purification system either in the early development phase of a product or to assess whether a batch process can be optimized and scaled into a continuous process.

Biotechnological fermentation processes are widely used in industry to produce an abundant range of organic products that often need to be purified in order to meet high-quality standards.
Typical bioprocesses comprise:

Industrial Bioprocesses can be characterized by a few common rules of thumb:

Conventional downstream processing involves biomass separation from the soluble fractions of the fermentation broth as a first step (e.g. filtration, centrifugation). Hereafter, other downstream process steps follow, depending on the required product purity and concentration. Decolorization is often necessary to remove the brownish color of a fermentation broth, caused by degenerated sugar and proteins. Adsorption chromatography is widely used to bind the product of interest or the impurities to a specific resin (sorbens), packed in a column (packed bed). The bound product is then eluted and can be used in further processing like crystallization. After elution, the resin/column is regenerated and cleaned (CIP-Cleaning In Place).

A typical process flow diagram is shown in the figure below.

Conventional bioprocesses can be summarised by the following steps:

In adsorption processes, the adsorbent is held in a (pressure) vessel, most often called a resin vessel. The stationary phase is referred to as a packed resin bed. As the process fluid flows through the vessel, the resin attains equilibrium with the process fluid, resulting in a mass transfer zone that gradually moves through the bed. If the mass transfer zone has reached the exit of the resin bed, the bed is saturated and “breaks through”. The resin needs to be washed and regenerated before it can be loaded again. As a consequence, continuous processing of the liquid requires at least two fixed beds, but usually, three beds are installed.

In the previous century, the advantages of continuous countercurrent processing have been recognized for adsorption processes, as well as for other mass transfer processes.

In SMB technology, the chromatography material is kept inside columns or vessels. The transport of the chromatography material is obtained by periodically switching in- and outlet positions.
In the 1980s, the SMB concept was originally developed for binary fractionation processes, where a stronger and weaker binding component are present in the feed solution and are separated into two product streams:

A state of the art example of such fractionating system is the production of High Fructose syrup fractions in the sugar industry. Here the Fructose is the monosaccharide with a stronger affinity towards the resin compared to Glucose.

This zone distribution is not restricted to the four as mentioned, for instance, regeneration and cleaning in place have been frequently applied.
Bind and elute SMB systems are designed in carrousel configuration, featuring a central rotating fluid distribution valve, and a static vessel configuration featuring a valve block for each individual resin vessel. Each valve block is identical and comprises a number of valves accommodating all in- and outlet flows that have been defined for the chromatographic cycle.

The below figure represents a typical conceptual flow diagram for a bind and elute system.

Bind and elute IX chromatography systems based on the SMB principle has opened a huge field of applications where valuable products are recovered or purified on a continuous basis thereby saving substantial water consumption as well as elute and regenerant agent.

XPure has the experience and capability to design and build custom-made SMB continuous Ion Exchange and Chromatography systems under the product name XPure™.

In general, a process development study can be approached from different angles and started or initialized in different stages of the study.

When developing a production process first the target objectives should be defined; what is the required yield and purity of the target compound; what is the composition of the starting material (feed); which recovery or purification process is most beneficial in terms of energy (including clean water) and material consumption and gives the least waste production; what is the scale of continuous operation.

If industrial (IX) chromatography could be a (or one of) potential route, we then start surveying the literature on the presence of similar or equivalent applications for the particular compound or molecule under study.
If literature cannot elucidate the case, based on the molecular structural or other adsorption relevant characterization, a resin screening study can be conducted. The outcome would be one or several resin functionalities that are preferably commercially available.

A lab-scale column test on a representative feed sample, a so-called pulse-response test, repeated for a few different resin species will obtain a strong indication of the effectiveness of a specific adsorption system.
Depending on the specific adsorption capacity of the target molecule onto the resin, further column tests, so-called breakthrough tests, will produce data on the resin capacity and information on how to elute (buffer composition, treatment ratio) the target molecule.

In the case, that potential resin candidates can be identified for the purification job the column tests can be elaborated with further break-through or pulse-tests at variable process conditions that cover the window of operation in a full-scale industrial setting. Typically this is conducted on one or two best performing resin candidates from the previous stage.

Here a Design of Experiment approach combined with the rationale of experienced chromatography engineering practice is used to define how many column tests will be conducted and what parameters will be varied at different levels.

Based on the data from the extended tests a preliminary process design and CAPEX/OPEX estimate can be made. Here we have developed our design tool where all relevant parameters can be put in and the outcome shows a full-scale SMB configuration and equipment dimensions. Dimensional data refer to a number of individual resin cells, dimensions of resin cells, line and valve sizing, and pressure drop per distinct zone.

The design tool is based on the 2-film mass transfer kinetics model which is the principle for which we have created an algorithm. The design tool further features the (universal) Kremser equation for counter-current contacting.

A set of physical and mass flow-related variables have been accounted for. The most important parameters are:
Resin porosity, particle size (specific area) and evidently the most important — specific adsorption capacity; diffusivity in both liquid and stationary phase; void fraction of resin bed; bed velocity; fluid viscosity and temperature.

The design tool could also be deployed if the adsorption system is a state of the art process, or close to this. In that case, lab-scale column tests could be skipped, and the specific feed characteristics need to be combined with the (specific) resin type that could do the purification/recovery job.

The output of the design tool can be used to do preliminary cost and value engineering. The outcome is essential to evaluate the purification/recovery process.

In the case of a positive decision, i.e. a (IX) chromatography process is the most beneficial and cost-effective route, the process can be optimized on a (slightly) larger scale.

Here we can enter two different scales for piloting. A mini-pilot or lab-SMB system featuring small resin cells up to 1-inch column diameter and on average 200-500 mm bed height that still can be operated on a lab scale.

1. A mini-pilot or lab-SMB system featuring small resin cells up to 1-inch column diameter and on average 200-500 mm bed height that still can be operated on a lab scale. 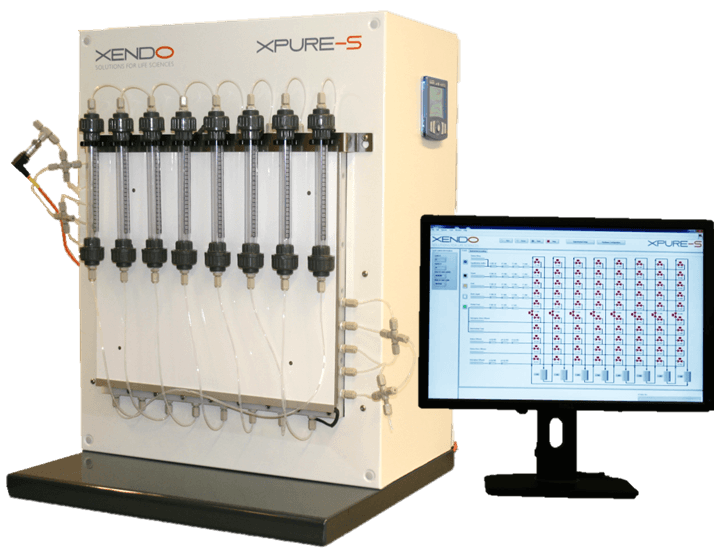 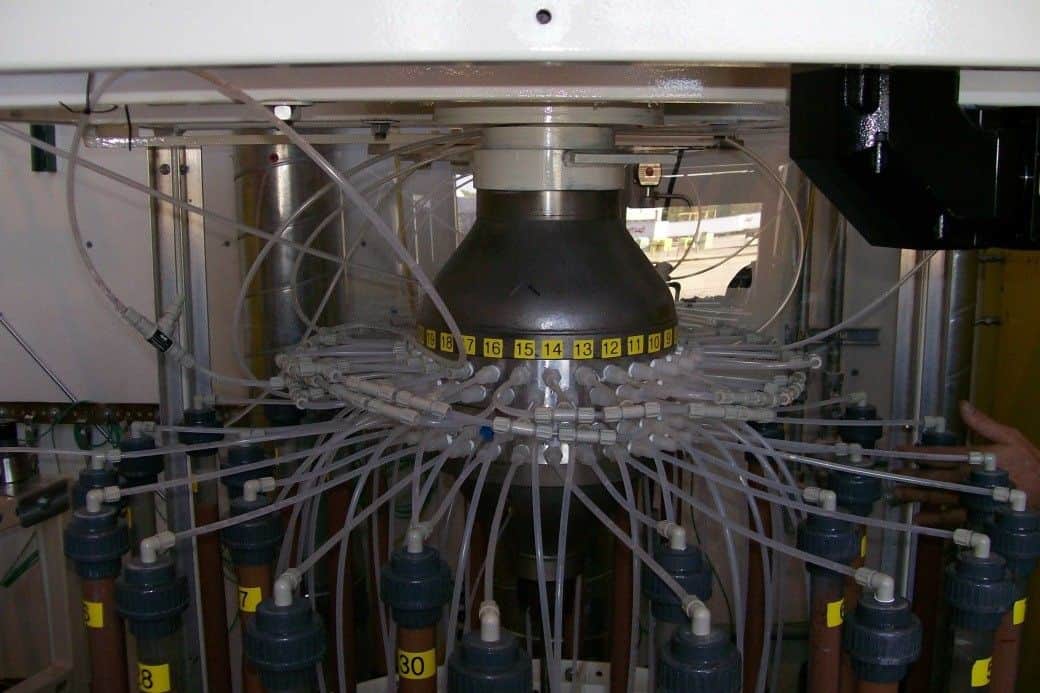 The selection merely depends on the availability of adequate feed and buffer volumes, any uncertainties that may not adequately be identified on an industrial scale, for example, impurities presence and identification, the presence of suspended solids, or temperature variations.

The large scale pilot system typically works on-site, close to the operating plant, or at a pilot facility.

The outcome of a pilot study will be a robust design of the industrial scale process also featuring chemical consumption figures, product yield, and purity. From the design data, the basic engineering of auxiliary equipment, like pumps, inter-stage tanks, piping, instrumentation, etc., can commence. Ideally, a commercial design proposal is the final delivery of a pilot study. The client/end-user can now make a final assessment of the chromatographic process, possibly comparing this –if any- with alternative purification processes (e.g. batch-wise adsorption, crystallization, evaporation, distillation et cetera)

Simulated Moving Bed has distinct benefits over classical single column systems with significantly higher yields/productivity and lower consumption of chemicals, water, and energy.  Also, it lowers production cost due to the lowered column volume and diminished use of chromatographic separation medium (resin) and, of course, less labor.

This continuous production system is increasingly used on industrial scale and also becoming more popular in the pharmaceutical, fine chemicals and food sectors due to its capability to be integrated into production plants, where it contributes by delivering high concentrations of product under the beneficial circumstances mentioned before. Because of these advantages, we see a bright future for this technology for separation, purification, and recovery, turning simplistic batch separation operations into profitable continuous processes. Next to these advantages, SMB fits seamlessly into the developing trend of sustainable solutions and the realization of a bio-based economy.

If you’d like to investigate what SMB could mean for your production processes don’t hesitate to contact us or have a look at our currently available systems: XPure-C & XPure-S. We also have a wide variety of pilot studies available for those interested.