Below we will present a new development regarding Expanded Bed Adsorption (EBA) technology. A turnkey solution is presented that makes feasibility studies using EBA easy.

Biotechnological fermentation processes are widely used in industry to produce an abundant range of biological molecules (small molecules as well as large molecules, from amino acids to complicated monoclonal antibodies) which often need to be purified in order to meet high-quality standards. Examples of these fermentation feed streams include mammalian cell cultures, yeast, and bacterial suspensions. Next to that plants like Tobacco are genetically engineered to produce recombinant proteins. These feed streams have in common that they contain particulates (e.g. cells, cell debris) and are hard to clarify. 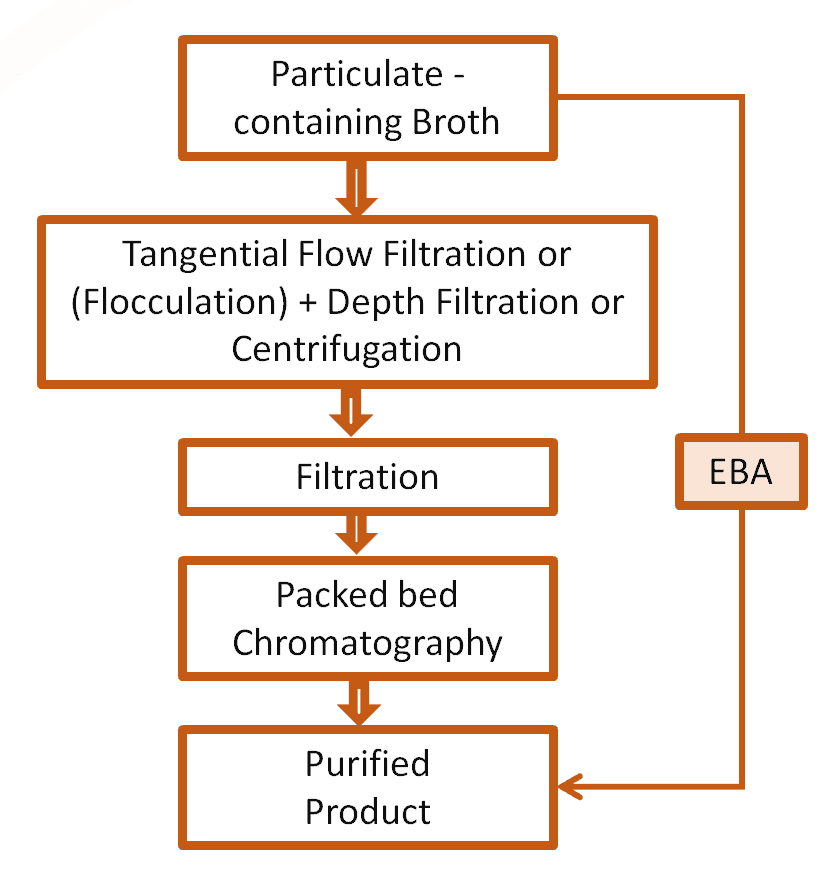 In the diagram, the initial phase of the purification of a biological molecule is depicted. Several technologies (or combination of technologies) are commonly used to remove particulate material and isolate the molecule from the biological fermentation broth. For clarification the following technologies are widely used:

In general, a packed bed chromatography step is applied after clarification of the broth. Different chromatography resins can be used (including cation exchange resins and affinity-type resins) for a typical bind (adsorption) and elute process.

This purification process can be significantly improved using the Expanded Bed Adsorption (EBA) technology as can be observed on the right-hand side of the diagram. Whereas traditional column chromatography uses a packed resin bed, EBA uses an expanded bed. Particles such as whole cells or cell debris, which would quickly clog a packed bed column, easily pass through the expanded bed. Therefore, EBA columns can be used directly on crude harvests or slurries of broken cells, thereby bypassing initial clarification steps such as centrifugation and filtration. 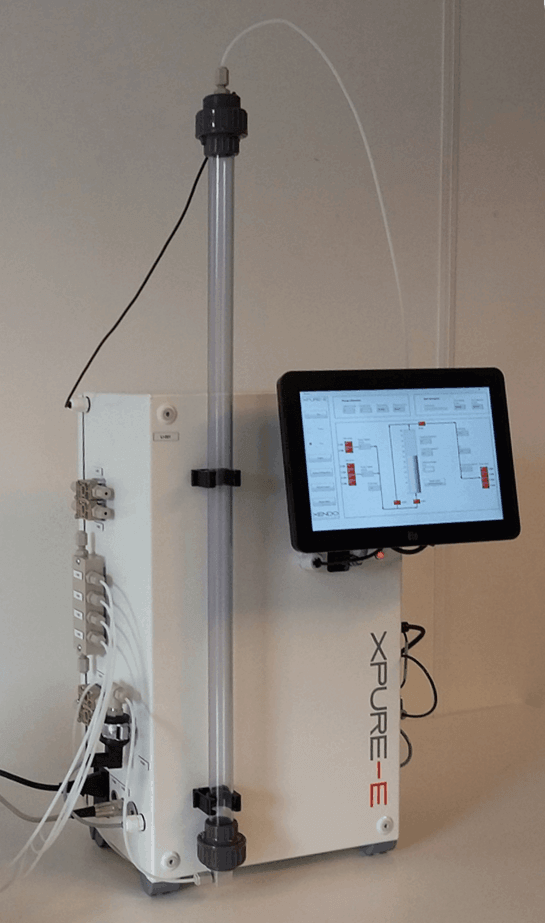 The XPURE-E system operates with a closed-top column and therefore only one pump is needed to operate the EBA column. The system can be equipped with analytics including in- and outlet pressure, pH, conductivity, bed height, and UV.

The XPure-E system has been designed and built to perform EBA chromatography operation in a smooth and controlled fashion.

The most important feature of the XPURE-E system is the capability to monitor and control of the expanded bed level (bed expansion). This is important since an EBA process is run preferably at a predefined resin bed expansion. The level detector is integrated in the top adapter of the EBA column and continuously monitors the resin bed level.

In the figure below is illustrated how the expansion of the resin bed (orange line) is monitored when the flow rate is stepwise increased from approximately 500 up to 850 cm/h (gray horizontal lines). The bed expansion factor is calculated by the software from the expanded bed height and the settled bed height. 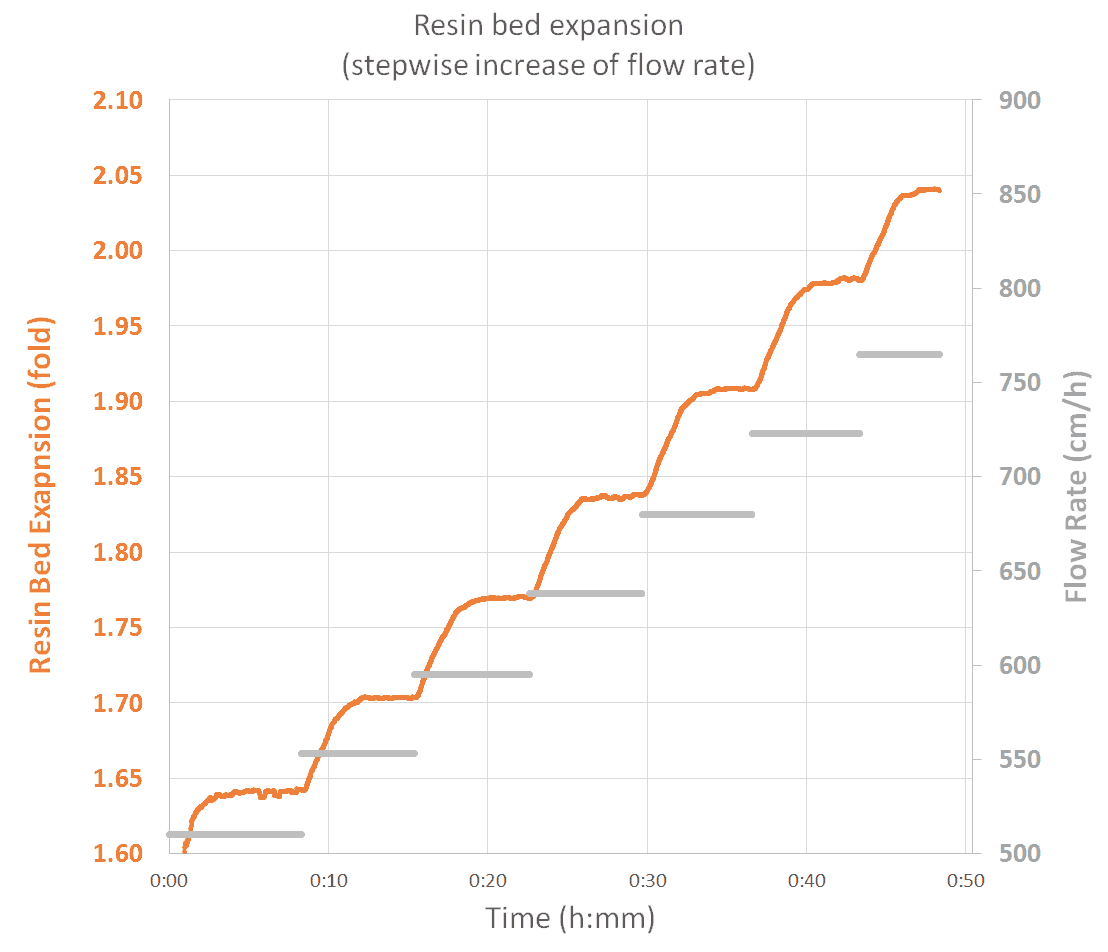 As mentioned the XPURE-E is also designed to control the expanded bed level during operation. This is brought about via a feedback loop on the pump. The density and viscosity of different feed streams (incl. buffers) within one process may be different and may lead to changes of the resin bed expansion in case the flow rate remains the same. Therefore, the resin bed expansion needs to be controlled actively and kept constant within (narrow) ranges during the entire EBA process.

Active control of  the expanded level during the process can be established in 2 ways:

In addition, it is also possible to operate the system without active level control. This feature can be used in case all feed streams are well defined and result in a predictable resin bed expansion at target flow rate.

The software platform allows the user to perform experiments in an easy and automated manner.

The XPURE-E is controlled by a comprehensive software package that runs using Windows operating system. Manual and recipe-based operation is possible all via a 10” touchscreen. The recipe is introduced into the system through a recipe editor (see the figure below). 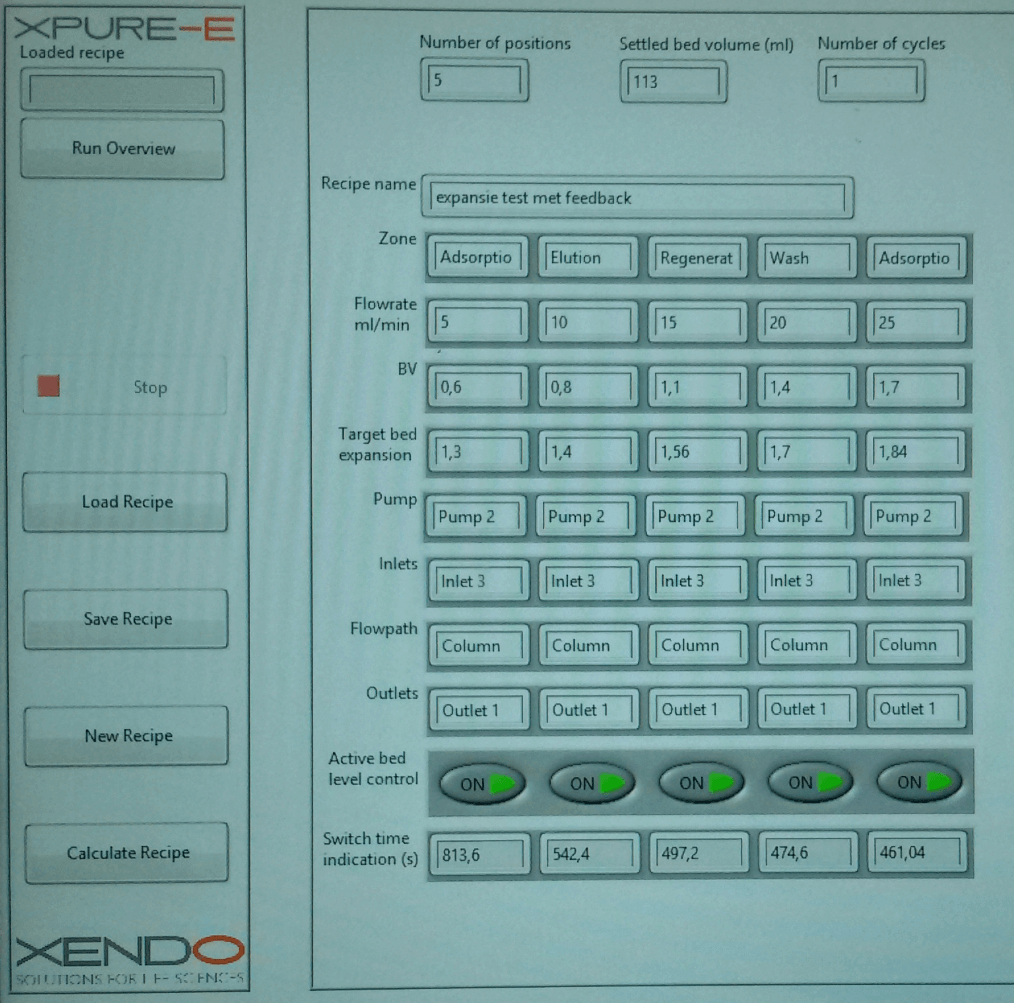 It allows the user to define the process recipe including:

The software calculates the expected process time per step and for the whole process. The intuitive graphic user interface gives the analyst an insight into the current state of the EBA process through various overviews.  The data generated can easily be processed in spreadsheets such as Excell.

If you’d like to investigate what EBA could mean for your processes don’t hesitate to contact us.