The use of Expanded Bed Adsorption (EBA) for the purification of biological molecules from unclarified harvest is well described for many applications in the literature. The advantages are obvious; including shorter process time, higher yield, low buffer consumption, and no additional clarification step.

The next step to further increase the productivity within e.g. bio-based industries is the integration of EBA with Simulated Moving Bed (SMB) technology in one single unit. For this application, multiple EBA columns need to be connected to each other in order to obtain the full advantage of processing in SMB mode. Important differences as compared to packed bed column chromatography are that

The main challenge is to prevent the collapse of the expanded resin bed or a sudden increase of the resin bed level resulting in loss of resin particles at the column top outlet. The latter may happen when the density and/or viscosity of unclarified broth is significantly higher than the aqueous process buffers. It is evident that the processing of high viscous (feed) solutions result in a (much) higher resin bed expansion as compared to aqueous solutions at the same flow rate. Both occasions; a too low bed expansion or too high expansion are potential obstructions to properly execute EBA processes in SMB mode.

A number of strategies can be applied to keep the level of the expanded resin bed constant during the processing of unclarified broth.

The third option requires profound process knowledge. The behavior of the resin bed expansion as a result of a change in flow rates and consecutively applied different feed streams and buffers need to be known in order to develop a proper strategy for controlling the EBA process. Furthermore, it should be taken into consideration that time and volume required to achieve both the required expansion and an effective process step may constrain each other.

Using well-characterized feed streams, it is worthwhile to anticipate the expected changes of expansion brought about by the consecutive processing of unclarified broth and different process buffers. Three parameters are relevant a) required volume per step, b) flow rate, and c) viscosity/density.

(a)   Make an assessment of the number of settled resin bed volumes (BV) needed for the execution of the EBA process. This can be done based on a regular packed bed chromatography process. It must be recognized that the displacement of particulate containing material does take more rinse volume in EBA mode.

(b)   Establish the flow/expansion behavior of the unclarified broth and all process buffers. This will give a reliable indication of the flow rates that need to be obtained for each process step.

(c)   Establish the behavior of the expanded bed during the transitions between unclarified broth and process liquids.

Crucial is to know how the expanded bed responds to the change to a feed stream with a higher viscosity (for instance unclarified broth). Loss of resin from the column top may occur if the flow rates remain too high. This is particularly relevant in case the EBA process runs in SMB mode. In a worst-case scenario, the resin particles may block valves and tubing and damage the system.

Below, an example is given how the expanded bed level can be kept in a narrow range during the transition from an aqueous solution to a high viscosity solution just by changing flow rates in a smart manner.

First, the flow rates have been determined to obtain the target expansion of 1.85-fold for water and the viscous PVA solution (i.e. 610 and 344 cm/h, respectively). Thereafter, it has been investigated how the expanded bed responds to the transition from water to the PVA solution. Figure 1 shows what will happen when the flow rate is directly switched from 610 cm/h to 344 cm/h upon changing to PVA: a sudden sharp decrease of the expansion is observed within 0.5 BV. Not earlier than after 3 BV the expanded bed reaches the target 1.85-fold expansion. This is an undesirable situation. An unstable bed may result in suboptimal flow distribution and mixing of the supernatant. 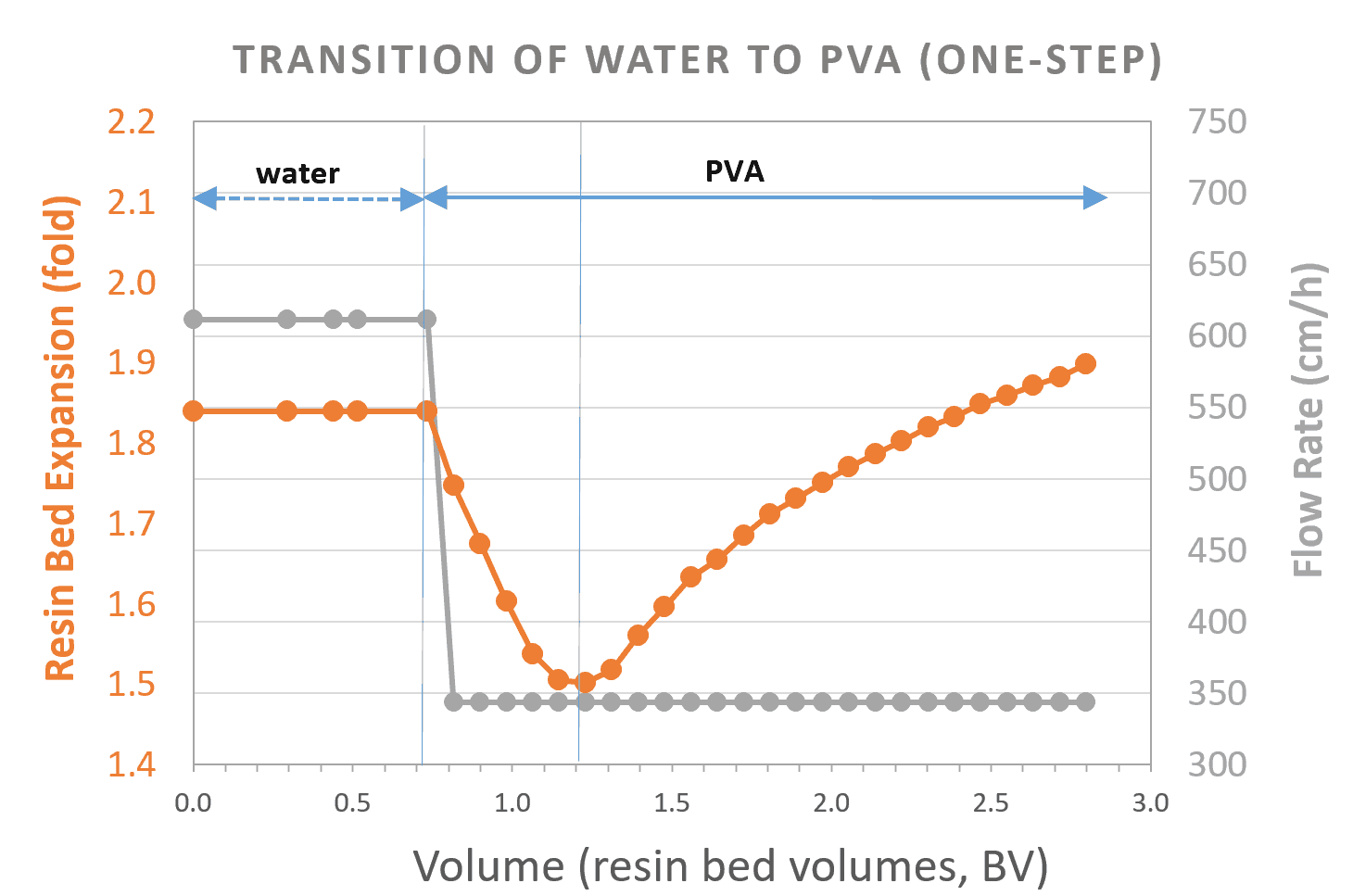 Figure 1. Impact of a 1-step decrease of flow rate on the resin bed expansion in case the flow rate is changed directly upon switching to the PVA solution (“unclarified broth”).

This is prevented by initially doing nothing i.e. just keep the flow rate unchanged upon the switch to PVA. As shown in Figure 2 there is a substantial delay of the bed expansion to respond to the PVA solution. By keeping the flow rate unchanged for 0.5 BV the collapse of the expanded resin bed has been prevented. Interestingly, the first change in flow rate (i.e. 400 cm/h), followed by a second change to the final flow rate of 344 cm/h during the transition has a major effect on the resin bed expansion: undesirable changes in the resin bed expansion have been prevented. 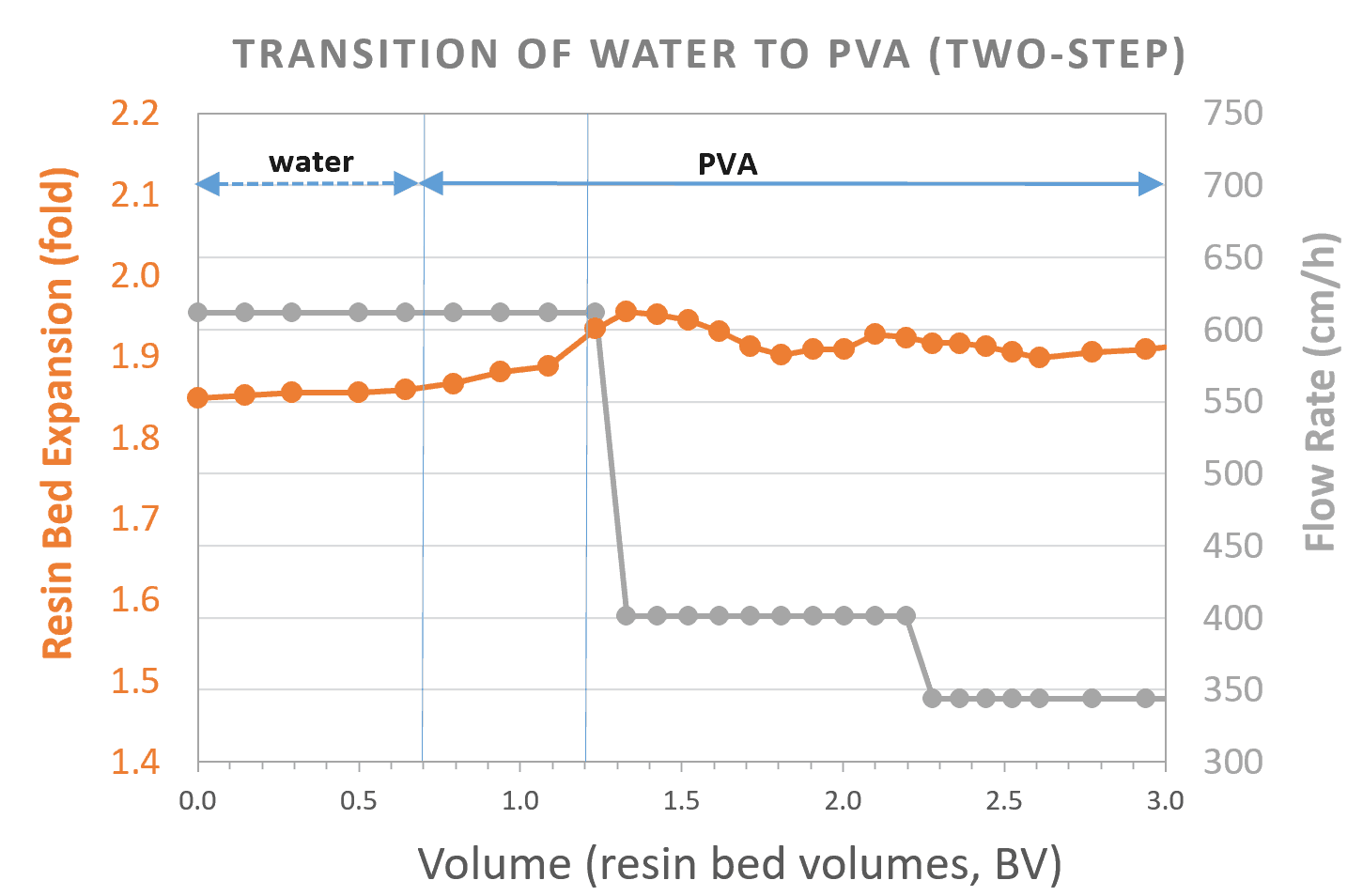 Figure 2. Impact of a 2-step decrease of flow rate on the resin bed expansion in case the flow rate is changed after 0.5 BV after switching to the PVA solution (“unclarified broth”).

A development strategy for processing unclarified harvest in EBA-SMB mode has been presented. By taking the delay of the expanded bed to respond to changes in viscosity into account, simple programming of flow rates and volumes for the individual process steps prevent significant changes in resin bed expansion. As a result, the resin bed expansion remains within a 90% – 110% range of the target bed expansion and enables the successful processing of complicated feed streams in EBA-SMB mode.