L-lysine is one of the essential amino acids that cannot be synthesized in the body. The main application of lysine is animal feed. The global market for food-grade L-lysine is estimated at over 800,000 ton (2007 figure). The market price for bulk lysine has dropped significantly over the past decade(s), forcing suppliers to apply more efficient manufacturing technologies.

L-lysine is produced by fermentation of Brevibacterium flavum, which yields very high concentrations of lysine in the broth. Other strains have been developed, e.g. to produce lysine based on other substrate for instance bio-based materials. After the fermentation, the lysine broth is clarified and subjected to ion exchange for purification, followed by concentration and crystallization. The mother liquor of the crystallization is recycled towards the ion exchange system.

This study also applies to other amino acids. Amino acids typically are zwitterions, the amino group can be protonated (-C-NH3+) at a certain pH and the carboxylic acid is then deprotonated (COO–). This means they can bind to either (strong) cation and/or anion resins, depending on pH related to their iso-electric point(s) (IEP). Not all amino acids show a straightforward ionic behavior due to the complexity of their sidechain. For example, tryptophan contains indole, creating a non-polar, aromatic amino-acid.

The most relevant specifications for a typical lysine feed solution (combined fermentation broth and recycled crystallization mother liquor) are:

Generally, the mother liquor represents approximately 15% of the overall lysine content in the ion exchange system.

The key parameters in the process design for 50 ktpa production capacity are:

The net water consumption takes into account the fact that the entrainment rejection water (3.63 m3/h) is recycled in the process. 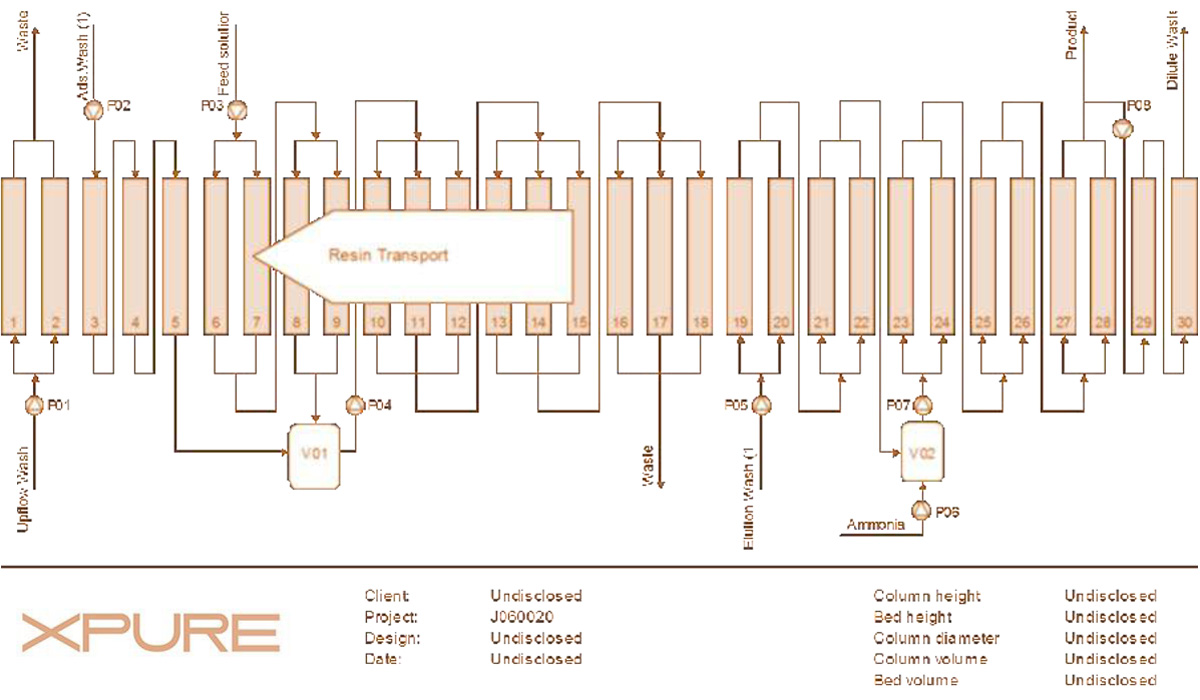 More than 75% of world production of lysine is purified using continuous ion exchange. For the purification of lysine, nowadays, normally carousel type systems with 30 columns are used. An example PFD is given in figure 1. This configuration comprises the following zones:

The purification can also be done in a carousel type system with 20 columns, configured similarly to the 30 column system. The number of columns in the different zones is reduced, which will have some influence on the performance of the lysine purification. Further, a 20column system would offer less flexibility applying, for example, an additional upflow wash and entrainment rejection zone. The latter is useful to increase product concentration in the effluent. Both configurations are possible on a carousel type SMB but are too complex on a static SMB. Static type systems normally use a lower number of columns. Often only 8 or 12 columns are used, meaning even less flexibility remains for additional zones. A fundamental consequence of an 8-12 column system is a strong decrease of the counter current effect in wash and multipass adsorption zones.

In Table 1 the effect of the SMB configuration on the resin inventory has been illustrated. It is obvious that the related wash and rinse volumes will inverse proportionally grow with the installed resin volume.

A carousel configured SMB system comprising 30 resin columns offers a very efficient and robust process for the purification of L-lysine from a fermentation broth. The system offers enormous flexibility, allowing minimization of the consumption of water and chemicals. An SMB system with less columns, for example 20 or even 12 columns, will give reason to compromise flexibility and effective resin utilization to maintain the same performance. The static type continuous IX – for example 8-12 columns – is more complex in terms of fluid distribution valve blocks than the carousel type of continuous IX. Although the static type of continuous IX uses fewer columns, the column volume needs to be substantially larger to obtain the same adsorption efficiency. The total resin volume will, therefore, be larger than in a carousel system. The reduction of columns also reduces the wash efficiency, purity, and concentration of the product and it reduces the total yield of the process.