Sugar is produced in many countries all over the world. The term “sugar production” relates to various products, primarily mono- and disaccharides.

There are two widely applied large-scale chromatographic carbohydrate (sugar) separations: the isolation of the disaccharide sucrose from molasses and the separation of the two monosaccharides fructose and glucose (Figure 1).

Figure 1. The structure of fructose (left) and of glucose (right)

Monosaccharides like fructose and glucose are produced mainly from beet, cane, or corn. After several refinery steps, including milling, filtration, and hydrolysis, a mixture containing glucose is obtained. Glucose is isomerized using immobilized enzymes to the much sweeter component fructose. The composition of this equilibrium mixture ranges from 50/50 to 45/55 (fructose/glucose), and often contains up to about 8% of oligosaccharides.

This mixture is separated by chromatographic separation into a fructose-rich and a glucose-rich component. The dry matter content of the feed flow varies up to 60%w/w.

The resin material used in fructose/glucose fractionation is a gel-type sulfonated polystyrene-DVB strong acid exchange resin in the calcium form. The separation is based on the preferential adsorption of fructose, which forms a complex with the calcium ions. This chromatographic method is called Ligand Exchange Chromatography (LEC). There are several commercially available resins for this application.

Both components are recovered for over 90% and the purity of the product flows is above 90% as well. Glucose is recycled and re-isomerized; fructose is sold as a pure product or mixed with the equilibrium mixture mentioned above to yield high-fructose syrup. The fractionation process takes place at 60°C, to reduce microbial contamination and to reduce the pressure drop by lowering the dynamic viscosity of the liquid.

The chromatographic separation of fructose and glucose can be efficiently done in a simulated moving bed (SMB). Figure 2 shows experimental data from a glucose-fructose fractionation in an SMB system. It also shows the predicted performance from our process design software. 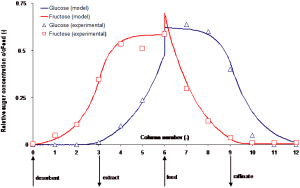 Figure 2. Comparison of production data of fructose/glucose fractionation on a 12-column system with calculations according to our process design model

The same fractionation mechanism applies for lots of other applications,

Figure 3 conveys a generic projection of a 4 zone / 8 column fractionating SMB system. It is stereotype for any binary fractionation system. 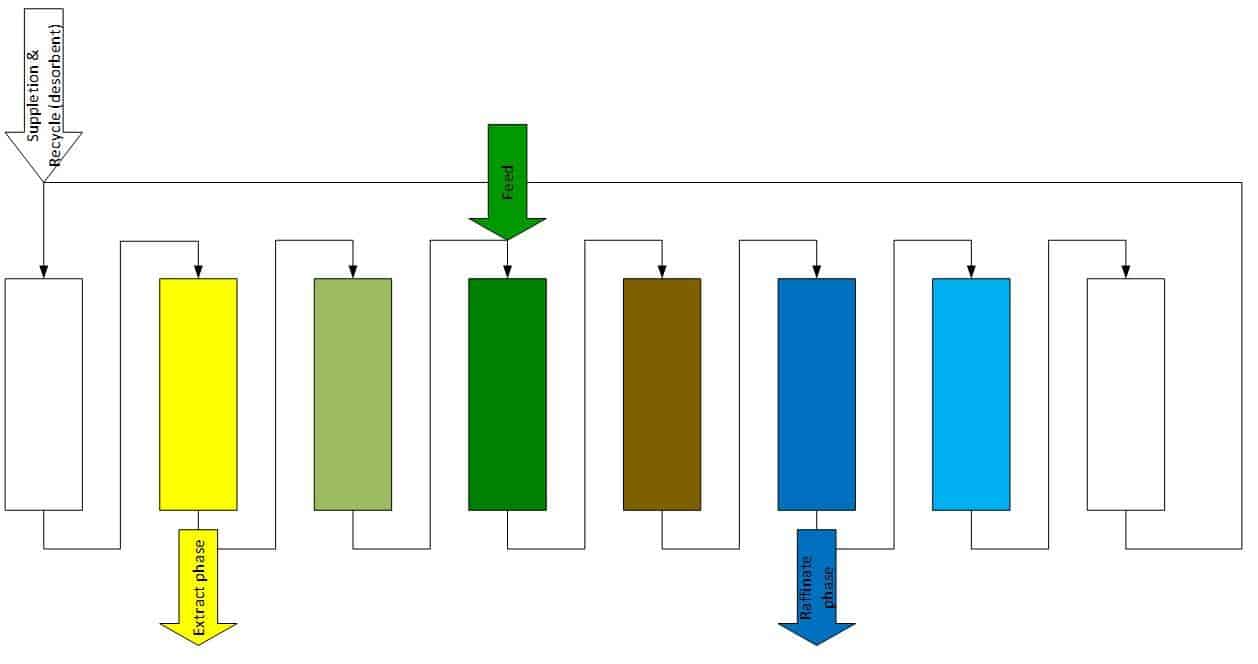 The fractionating principle evidently can be applied in a large field of applications.