A shift from batch production to continuous production requires a different approach in terms of process control. Especially when the continuous chromatography is, in essence, a rapid sequence of “batch” operations with specific conditions for each process step. Combine this with the integration of the unit operation in a production chain, process control quickly becomes critical. With several real-life examples of how control within an SMB can be applied, this blog will look into the different levels of process control for continuous chromatography and how they work together to ensure an efficient process. These examples cover the impact of variation in processes due to flow rate control or sensor-based progression on cycle times and how to mitigate this impact and ensure steady state.

Before running an SMB you have to decide how you want to control it: synchronously or asynchronously.

An asynchronous process gives a lot more opportunity to control the process. It is possible to break down the process into a series of positions, where each position has a detailed set of instructions and conditions. A column can only progress through the process as soon as it has completed these set conditions. This approach places more control and responsibility in the hands of the process engineer and the control strategy.

As with any continuous process, it is important that the process is controlled in such a way that the desired steady state is obtained and maintained. At steady-state, the continuous process is performing at the intended efficiency and any deviation from this will impact overall process efficiency and economics. The process control and strategy should, therefore, be able to handle deviations that could disturb the cyclic steady state of an SMB.

For an SMB process, the progression of columns through the various positions within the process is conducive to the steady-state of the process. The condition for a column to progress can be based on time but also on different parameters such as pH or conductivity. An example of such a step is an elution step. In the elution zone, it can be economically attractive to stop collecting liquid to the elution stream when the product concentration in the eluent becomes too low and would cause dilution of the product stream. When letting an inline parameter control the progression of columns, time becomes a secondary progression condition and thus variation in switch times could occur. The control strategy should be able to ensure steady-state when this occurs.

Control strategy becomes even more important when SMB technology is hybridized with other technologies such as Expanded Bed Adsorption (EBA). As both technologies in a hybridization have their own specific set of requirements, the control strategy will need to be able to handle both technologies. To expand slightly on the EBA technology, this is a chromatography technique where the liquid flows in an upward fashion. This allows particulate matters (e.g. cells, cell debris) to flow through the bed without clogging. As the adsorbent is pushed up by the liquid flow, care needs to be taken that the bed level of the resin is monitored or controlled and that the adsorbent does not wash out of the column. An example of such a system, the XPure-E, can be seen here.

THE 5 LEVELS OF PROCESS CONTROL FOR SMB SYSTEMS 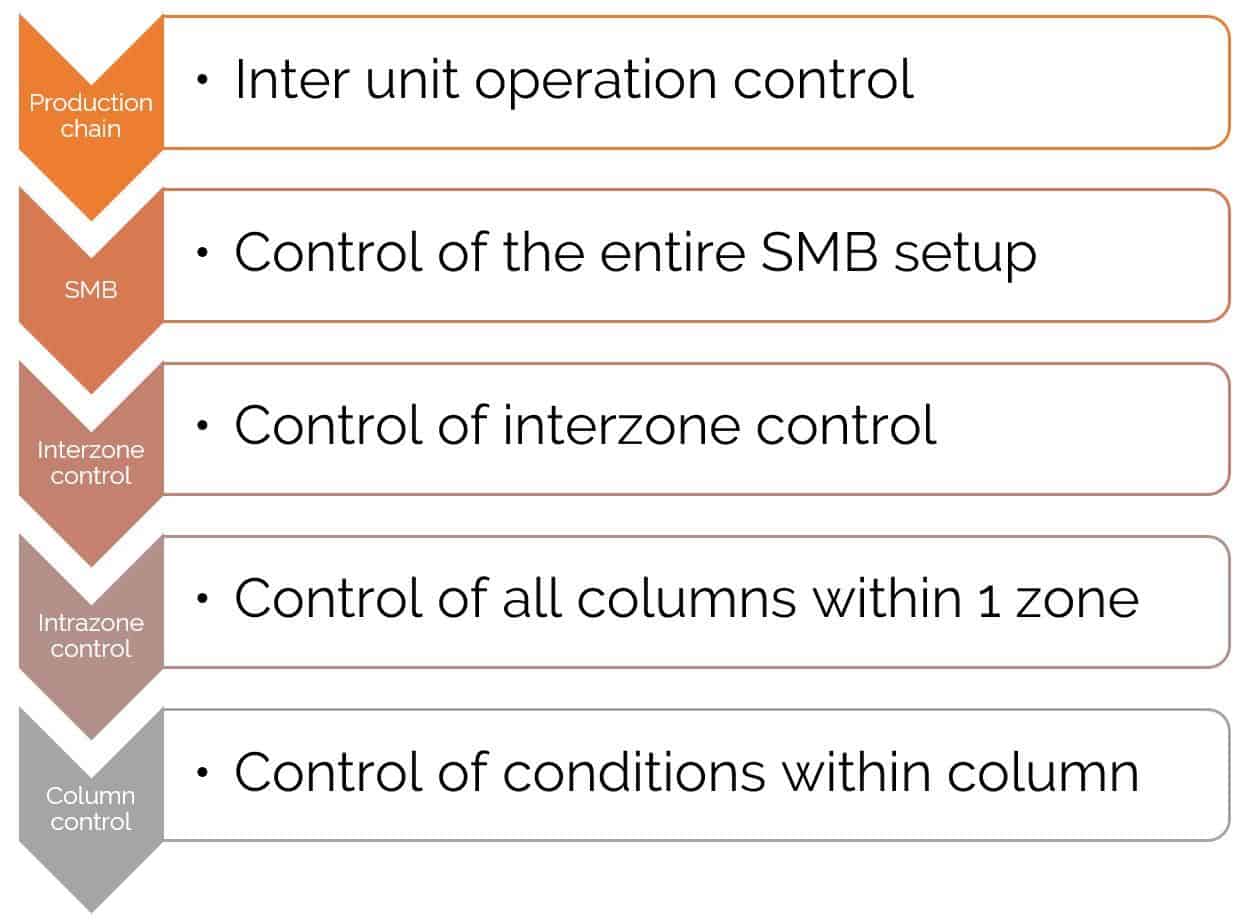 Figure A. the 5 levels of control within an asynchronous switching, optimized SMB setup 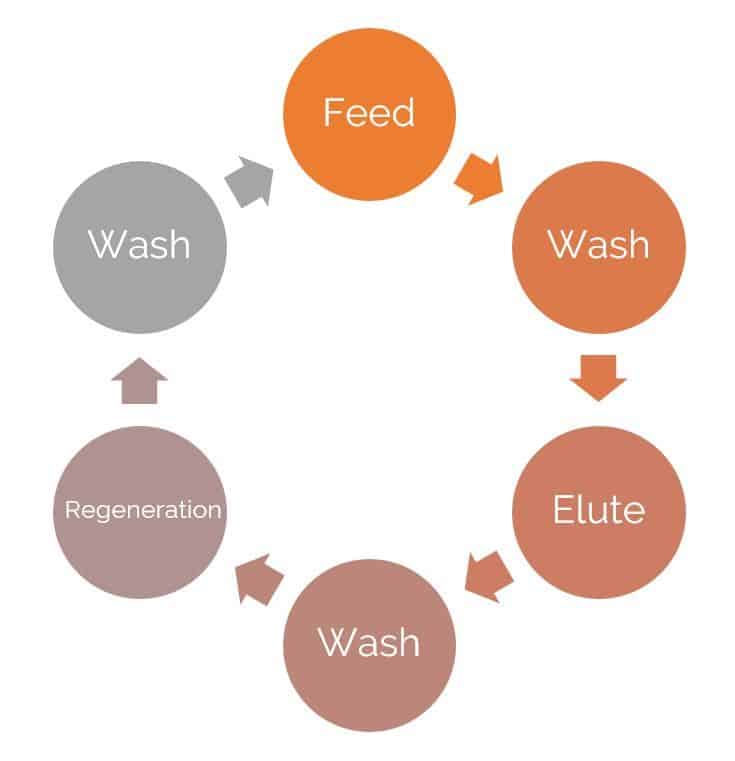 In processes where a certain set of conditions within a single column are needed to ensure the desired process efficiency, it is important that the control system can react to potentially detrimental effects down on a single column level. 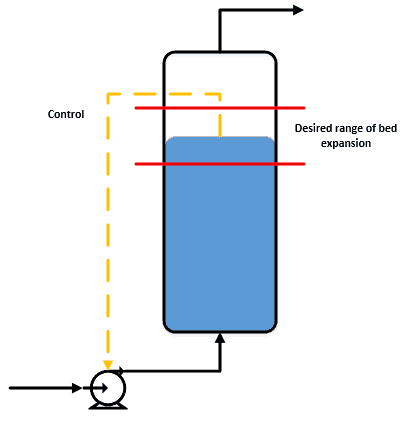 Control of conditions within the column use sensors directly connected to a column to control a parameter within the column. To illustrate this, in an EBA setup a bed level sensor can be used to ensure that the resin bed expands appropriately but does not expand too much and overflow out of the column. The sensor would control the bed level by controlling the involved pump(s). 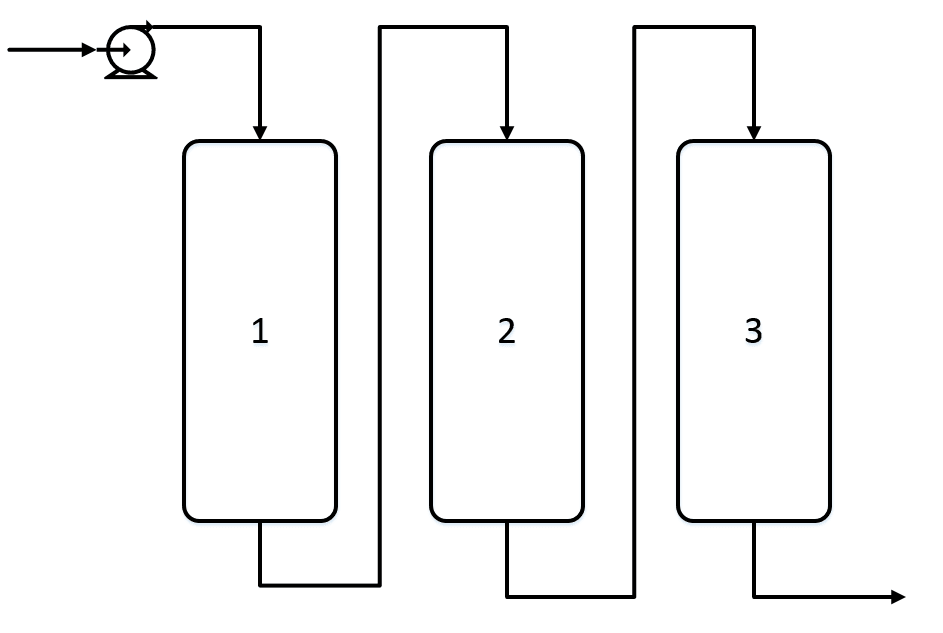 It is possible for an SMB to have multiple columns located in a zone. The column configuration can be both parallel and/or serial. In parallel the liquid stream is divided over the columns in parallel, effectively dividing the flow rate and increasing contact time. When the columns are in a serial configuration, the liquid is fed from the outlet of one column to the next.

When a zone has been configured with a parallel or serial configuration, the control strategy should ensure that the columns in the zone are only receiving fluid when the zone is populated with the required amount of columns. Therefore, it could be possible that two columns are “waiting” for a third in a zone requiring three columns. “Waiting” in this context would be that there is no liquid flow through the columns until the run condition of three columns is fulfilled.

Within a zone containing multiple columns, it should also be possible for a sensor to be able to influence the process. An example of this could be a zone with three columns linked in series. When product dilution in the product stream is undesirable, you would want to stop elution collection once a certain product concentration is reached. This means that a sensor connected to column three controls the outlet valve of column three, effectively controlling on a zone level.

Little control is required in zones where time is the main controlling parameter. As discussed previously, it is possible for a zone to be controlled by different parameters such as time, pH, conductivity, bed expansion, and UV absorption. In zones where other variables are the controlling parameter, time becomes a variable that could potentially affect system steady-state if inappropriately controlled.

As the cycle time for the columns needs to be equal, the variation in position timing needs to be compensated. To compensate in a fixed bed SMB, a column can be parked in a waiting position. This means that the valves to the column are closed and that there is no liquid flow through the column. In an EBA-SMB, there is the added complication of having the expanded bed which potentially cannot recover if it collapses after, for example, the feed zone. In this case, the compensation positions are used to keep the bed expanded and are a prelude to the next zone.

Process optimization for both SMB and EBA-SMB systems is done in such a way to minimize the duration of any waiting position. The aim of these waiting positions is purely to ensure a cyclic steady state.

The SMB as a singular entity also requires control. For a carousel SMB, this control is simple as only pump speeds and switch times need to be controlled.

As discussed above, a valve-based SMB allows for many more degrees of control enabling potentially higher levels of efficiency but requiring more rigorous process design. Depending on the requirements of control at column, intra-zone, and inter-zone conditions, the SMB control can be simple time-based switching or integration of several levels of control.

A comprehensive and holistic approach should be taken when designing an SMB control strategy. Single column experiments can yield significant information on how to control a single column level and provide enough input for an initial SMB design. For further steps however SMB experiments would be required, to allow for fine-tuning on higher levels of control.

Scenarios for inter-unit operation control for an SMB need to be determined from a good process understanding and then be tested to confirm appropriate SMB performance.